Based on a presentation by Chris Lindner – Manager, Product Science at Indeed, watch the full presentation here.

Note: This talk was presented in February, and the job market has changed quite a bit amidst the COVID-19 pandemic. While not specific to jobs in data science, Chris recommends checking out the data Indeed economists have released from the Indeed Hiring Lab for updated hiring data.

At #DSSATX (overall event recap here), we soaked up a data-driven talk on data science hiring patterns and trends by a guy who would know: Chris Lindner, manager of product science for Indeed, the world’s number one job site with 25 million active job postings, 250 million unique visitors per month, and 150 million posted resumes. That’s a lot of data to draw conclusions from about job statistics at scale.

Chris opened by saying “I want to do a little data sciencing on data science and see what exactly we can learn about our field.” And so we do!

At the same time, people have heard good things about data science as a career, so we can also look at how many people are actually searching for these jobs. In 2018, there’s a 14 percent increase year-over-year in searches for data science jobs.

WHAT IS A DATA SCIENTIST ROLE, REALLY?

Ask anybody with the data science title, what they do day-to-day, and you’ll find that they do wildly different things. Even though universities are now offering data science degrees, there's no consensus on what the heck it is or what should be taught in these courses.

In order to explore the data further, the Indeed team talked to employers and tried to understand a little better what they were looking for in a data scientist. They found that some companies are just renaming a lot of old jobs that have already existed—so business analyst-type jobs are being rebranded because “data scientist” is a sexy title even if they're not paying any differently or changing anything about what that role actually does. Other companies, on the other hand, are looking for a data scientist who has experience with machine learning, there's often advanced degrees involved, so that role is actually something distinct from older analyst roles.

There are some very clear clusters into these four categories: 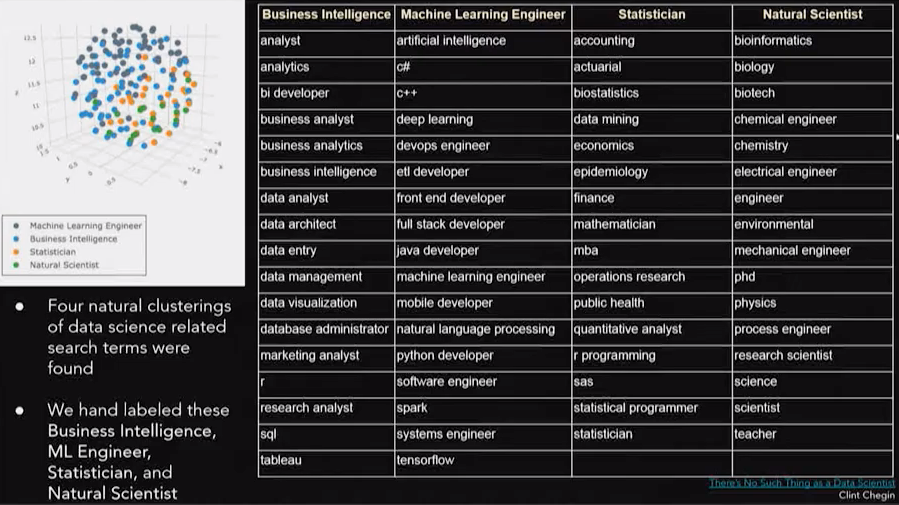 WHAT’S ON A DATA SCIENTIST’S RESUME?

So we've identified that there are different job titles and different roles in data science; but are there actually differences in their backgrounds?

What are these degrees in?

This makes a lot of sense if you think about the employment gap discussed earlier, where companies are just not filling data science roles fast enough. To get more people, it makes sense to start looking at bachelor's degree holders to fill these roles.

A data science degree is a newer field of study, but more and more common: 15% of people have a degree in data science.

What you don't see is a lot of people leaving data science; it seems to be sort of the endpoint where once people get a data science title that they tend to keep that title.

A lot of software engineers are the ones that are becoming data engineers.

Basically the short answer is: once you change that name from product scientist to data scientist, data scientists are gonna get more clicks.

Despite the data, Indeed sticks with the Product Scientist title even though it gets fewer clicks. Their reasoning is that the internal distinction is important: a product scientist does very different things than what a data scientist does. A product scientist is focused on the exploratory work, building models as exploratory work to see if a model is the right solution. If they identify a strong opportunity, it’s handed off to a data scientist, who is involved in implementing machine learning models, and tuning and tweaking those, making sure all the data sources are right—essentially doing the actual implementation.

Data scientists, product scientists, data engineers, and many of the other job titles covered here continue to be imbalanced in the job market: the supply falls well short of the demand. This is ultimately good news for our data community!

For more, you can check out the following blog posts, which are the sources of much of the information presented above.