How is Synthetic Media Transforming the Media Landscape?

We live in a society that can be resistant to change, especially when it comes to technology.  But according to Justin Hendrix, Executive Director of New York City Media Lab, the discussions surrounding AR and VR are hardly different from debates that surely arose during the installment of the first printing press.  As a key player on the forefront of augmented and virtual reality’s evolution, Hendrix details some of the main implications these new technologies have and offers some strategies on how to manage these changes.

Hello!  It’s great to be back here again and talking to you about synthetic media. I'll just tell you something straight up: I am NOT a data scientist. I am, as I was explaining earlier to some of my colleagues, I'm more of a connector ecosystem person.

In case you don't know what New York City Media Lab is, we are a consortium of universities here in New York and we work with a bunch of big media companies on innovation and emerging media technology projects. A lot of the work we do involves connecting executives and technologists in companies with faculty and graduate students across the city. Hopefully, there's some knowledge transfer from industry into academics and also from the university into industry.

Right now, we're doing some projects around extracting information out of content with faculty members from Columbia and also from NYU. I should mention also that we're just expanding over into the Brooklyn Navy Yard where we're building a new laboratory focused on future interfaces augmentation and virtual reality.

One of the things that we've been trying to think about a lot lately is the next decade because frighteningly, we're nearly in the second half of 2019. The Media Lab itself was started in a process called NYC Media 2020 where the city brought together a bunch of different executives and thinkers to look at the future of media. In addition The Media Lab, The Applied Sciences initiative was also started in this process and led to the start of a new university -  Cornell Tech on Roosevelt Island.

Get insights like this in person at our next Data Science Salon: Applying AI & Machine Learning To Media & Entertainment, on November 7 in Los Angeles.

When I look at the landscape right now, I think that the media is the thing that's most likely to change mediums most profoundly over the next ten years and part of that is because of where the money is being spent. If you look at R&D spending by the major technology companies, you know these numbers keep going up. These companies are really shaping the ecosystem and how media is consumed and monetized.

We're seeing a bunch of these technology vectors coming together. I think we're seeing something slightly different happening which is that media is now being generated from data.  That is substantively different from what we've been talking about for the last few years for the most part and that's an important trend that's exercising itself in different ways. We are beginning to see a new generation of technologies for personalization and recommendation coming along.

But what does that mean? Some of the simpler methods that widely diffused across media companies are becoming a blend of other disciplines. In thinking about user psychology, you also what to understand the economics of a user and what their circumstances are, even by using streaming data to do that. Understanding people and the context they're in will inevitably change the way that we're going to to create and serve up content.

Another big trend I want to discuss is the progression of media’s leaving screens. Right now, we're still looking at two-dimensional displays and most of the innovation in media over the last few decades has been about them. That's how a lot of us have made our careers - thinking about how information is portrayed on two-dimensional devices. What we're seeing now is something different happening involving voice, AR, VR and other forms of interface. Reality is, that for media companies, these technologies are creating lots of opportunities for the creation and invention of communications.

Individually, we're all getting in the habit of filtering and having fun with these new technologies, especially when it comes to portraying ourselves in different ways on the Internet. Over the next two years, this trend will create opportunities for media conglomerates as well. We're beginning to see real relationships formed between humans and  AI characters, so much so that a young man in Japan actually married one of these holographic images last summer, for example. Current research is looking at how to create novel images using adversarial neural networks by essentially blending two images to come up with a novel third image that is even more engaging for the user in the moment. Eventually, the idea is creating highly personalized dynamic advertising units that would essentially be completely original and served in the moment. 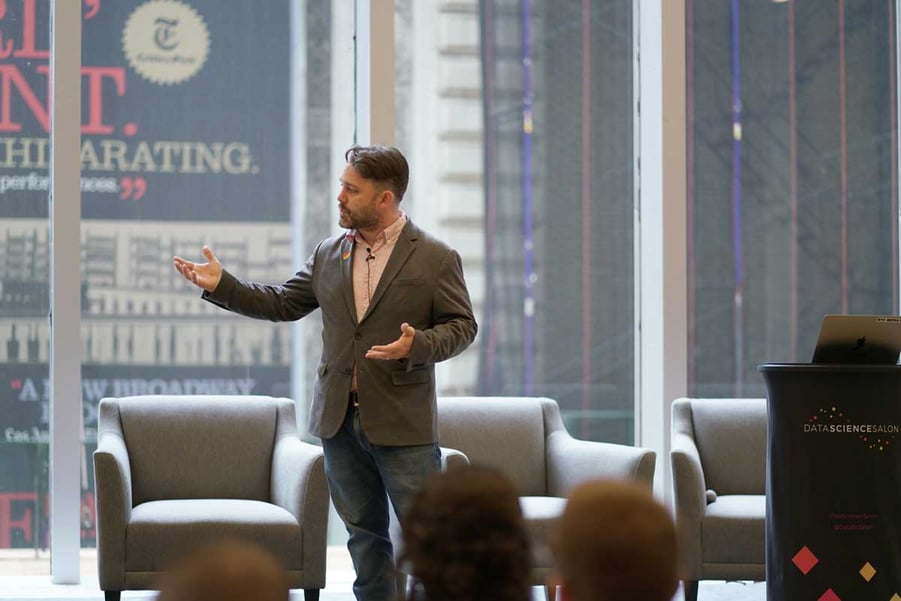 These discoveries inevitably drive a lot of implications for media companies as well as many ethical concerns. We're going to introduce more sensors into our homes and add computer vision increasingly into our daily life. Many technology companies, including Amazon, are trying to introduce a wearable device that is essentially trying to sense the emotions of it user. It would be a device on your body that keeps track of your emotional state, is in touch with the AI character that you interact with in your home, and connects you to content and commerce. And beyond an individual level, there are lots of very interesting and fascinating ways that these technologies will be used to improve the workflow of media companies.

If you believe the hype about AR and VR, it's not impossible to imagine these technologies’ becoming much more commonplace than they are now with the ultimate ambition’s being digital information transferred directly onto the retina. There’s nothing that says this is impossible, but it's also not going to happen anytime soon. There are optical challenges and power issues to consider, not to mention questions about safety. Nevertheless, investing in data science and specifically data science talent is going to set a foundation for these developments.

When we think about moving these technologies from hypothetical experiments to tangible products in the market, we need to think about what it means to combine user data with these approaches to the generation of content. What types of new products and services can we offer?  And what types of new creative tools can be generated with these? How much will these endeavors cost? And for many, the most important question is how will privacy and security be impacted? It’s not an exaggeration to say that whoever controls the data controls the future.

As more and more questions surface and potentially become overwhelming, there are a few things that I think we should be doing as we begin to move forward with putting these technologies into production. First, we really need to focus on diversity.  When we look at the the worst-case implications of what we’ve created so far, many of the negative externalities we've produced in our media and information environment could have been avoided if we had focused more on diversity. Second, some of the worst abuses that we can imagine will come from the blending massive amounts of personal information with the ability to automatically generate content. Having teams that are empowered inside of our organizations to challenge us on the ethics or the appropriateness of the different tactics that we might take may introduce dangers that we need to consider.

I do think these synthetic media technologies are going to create a huge amount of value and opportunities for human expression. I imagine there was a conference like Data Science Salon sometime around when the printing press had just been developed during which folks debated the implications of a new technology on society at the time. We have been through this before and hopefully we've got some institutions and ways of thinking that are a little more significant this time around. Community is essential and the idea of data science salons is excellent because regardless of how things unfold, we should all be looking into these questions together.