In this post, we’ll show you how to mine clickstream data using two key algorithms: Markov Chain for determining state transition probabilities and cSPADE for discovering sequential patterns. Using these techniques you can leverage your clickstream data to generate insights that enable you to deliver a better customer experience.

Grouping your clickstream data into sessions

With these definitions in mind, you’ll transform your raw event log data into clickstream data by:

At this point, you’ll have a dataset that looks something like this:

In the above dataset, each row corresponds to a session. The first column contains the session names, while the rest of the columns denote the actions (represented by A8, A14, A9, etc.) performed by the user during that particular session.

The Markov process is a stochastic process satisfying the Markov property of memorylessness. It is a random process in which the future is independent of the past, given the present.

A Markov Chain is a Markov process that describes the sequence of possible events, in which the probability of each event is dependent on the state attained in the previous event. It can be graphically represented as a transition diagram along with the corresponding probabilities, as below:

For clickstream analysis - a process X(n) takes the state m(n) from a finite set m at a given time n.

The order of the Markov chain is derived from the number of states on which the current state of the event depends. For example, a zero-order chain implies that the probability of being in a state in the next step is completely independent of any and all previous states.

Note: Balance here is crucial. The concept of a higher-order Markov Chain leads to more realistic models, but the number of parameters required for its representation increases exponentially.

We will use a third-order Markov Chain for this dataset because: 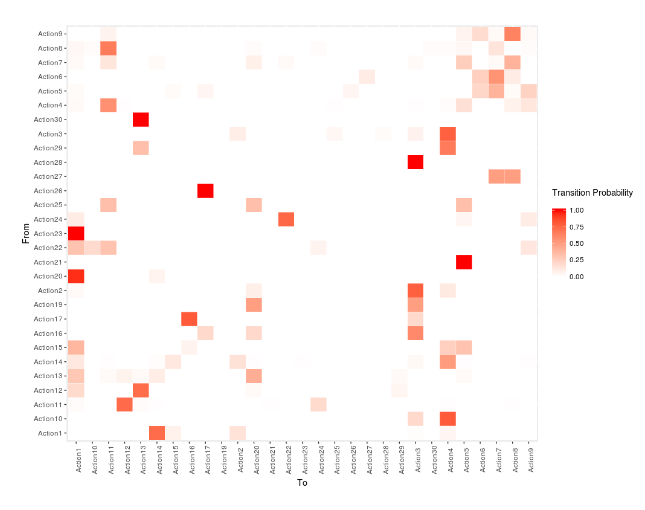 Using Markov Chains for clickstream analysis allows you to develop a data driven understanding of user behavior. You can predict what a user's next action will be and know the likelihood of them taking the action at any point - all based upon their previous actions.

Further, by starting from the state with the maximum start probability and following the probable transitions, you can learn how your customers commonly use your application or navigate your site.

Another approach to modeling clickstream data is to represent them as sequential patterns which you can mine to determine trends that meet a particular minimum support threshold.

In the example dataset, a minimum support of 40% generates the following 22 pattern sequences: 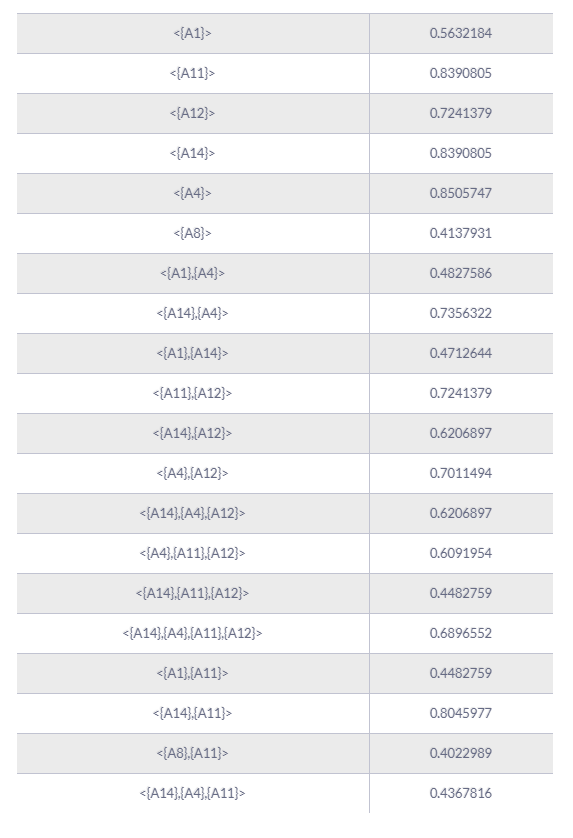 In the above table, for a given sequence pattern X, it is possible to predict the next click by searching for the pattern sequence with the highest support starting with X.

For example, after performing the action A14, the most probable next action is A11, according to the pattern sequence 8 – with a probability of 0.8045.

Note: lowering the minimum support will include less frequent patterns in your clickstream dataset - this can be useful in cases where you want to extract pattern sequences that lead to errors or failures in using our product or app.

Capturing clickstream data for analysis is hard, especially when you need to collect and combine data from multiple sites and applications. You can use a tool like RudderStack Event Stream to simplify the process. It makes real-time event data streaming easy and can pipe directly into the tools you're already using, like S3, Kinesis, Kafka, Redis and all of the major data warehouses.