What started off as a small local data science pop-up five years ago turned into one of the largest and most diverse data science communities around the globe. No one would have ever thought back then that the idea of bringing the data science community together could have led to the gathering of such an amazing group of data scientists, executives, engineers and analysts collectively excited to come together and share their experiences.

We are thrilled to celebrate our 5th anniversary today and we couldn’t be prouder of what has been achieved in the past years. We all know that five years is an eternity when compared to the rapidly changing field of data science and so many things that have happened in the meantime.

This would have not been possible without you: our partners, sponsors, collaborators and community members! We’d like to thank you for the trust you have placed in us and that we aim to continue preserving.

This is our story, which includes uncountable insightful, entertaining, fun, and sometimes nerve wracking moments, which we’re thrilled to share with you here.

2016: Getting started with data science pop-ups

In 2016 our Founder and CEO, Anna Anisin, worked for a SaaS company in the data science field, and she felt that the community of data science experts was lacking a comfortable place to meet and exchange their best practices. In such a rapidly evolving space, she recognized that a “collaborative community” was really the key to keeping up with the latest research and applying it to one's own use cases.

As a response to this need, Anna took the initiative and started  to organize small data science pop-ups in some of the most innovative cities in the US, including San Francisco, New York and Austin. The events weren’t super fancy but included really insightful talks and some great minds coming together in a casual atmosphere to share data science and machine learning best practices and innovations. Anna realized that this is only the beginning of something much bigger to come.

At this time there were a couple data science Meetups, events and conferences hosted by other organizers, and while they were all mostly focused on the content side of things, actual experiences, including networking and fun, were mostly non-existent. The new event series had to be different and so…  The Data Science Salon was born!

The first official Data Science Salon (DSS) launched in the vibrant city of Los Angeles. It was a  one day boutique event featuring speakers from media, advertising and entertainment industries. We picked this specific industry mostly because no one was talking about it yet, giving us the opportunity to build that community and drive the conversation. Attendees also enjoyed a cocktail hour and some truly unique contributions, such as the slam poem by Mollie Pettit, Front-End Data Visualization Engineer, which you can watch here:

2018: Expanding the DSS to Miami and NYC

Given the success of the first Data Science Salon, it was pretty obvious that data scientists in other cities should be able to join the fun too. The event series expanded to Miami, a tech hub on the rise with only three data science Meetups and no major events being organized so far. Check out the video below to see some impressions of the event.

Another Data Science Salon was hosted in New York, where there were many active data science communities in place already. These communities became our friends and partners, such as Galvanize, who offered DSS a space at their location to host the event. We’re grateful for all the support we received in the beginning and continue to receive from our partners today.

Simultaneously, with the growth of the DSS community, we also increased the number of members among our awesome DSS team, which ensured great content and smooth production of the events. We also collaborated with volunteers, who were excited to be part of the conversation, while offering their help to support us in organizing the events.

2019 was a BIG year for DSS as we hosted our first Salon in Seattle, as well as one in Austin in collaboration with Dell. We also launched various content initiatives that help data scientists learn from each other beyond the event series. Data experts started sharing their insights on the DSS webinars, DSS podcast series, DSS Roundtable articles and the DSS Content Board is formed with industry experts sharing their predictions and trends on their specific domain. We also launched the very first version of our subscription platform, DSS Insider.

Another big event this year was the kick off of the DSS Elevate initiative, which was designed to elevate women in the data field and help close the gender gap. Personal experiences, career advice and tips to overcome imposter syndrome were shared at Data Science Salon side events, the Elevate blog and an interview series available online as well.

2020: The birth of the DSS Virtual event series

With the pandemic disrupting the event industry and people no longer able to meet in person, we had to pivot with new strategies to ensure the community continued to share, grow, and thrive. It’s a moment of general uncertainty, and at first, we were unsure in which direction the Data Science Salon will go.

What seemed to be a huge risk turned out to be an incredible opportunity for the Data Science Salon, which we took fully virtual after our last in-person event in Austin at the beginning of the year. Local events converted to national and international happenings and a fast growing community from all over the US, Canada and Europe was now tuning in and joining the DSS experience. Content was entirely produced and hosted online, which enabled the attendees to hear the presentations not only on one particular day but whenever it was the most convenient for them.

The community was excited and hungry for more content, networking, and we started to regularly release data science content on the DSS Youtube channel. We also started sharing the latest AI and machine learning news in the DSS Play Weekly newsletter, including data science resources and events. 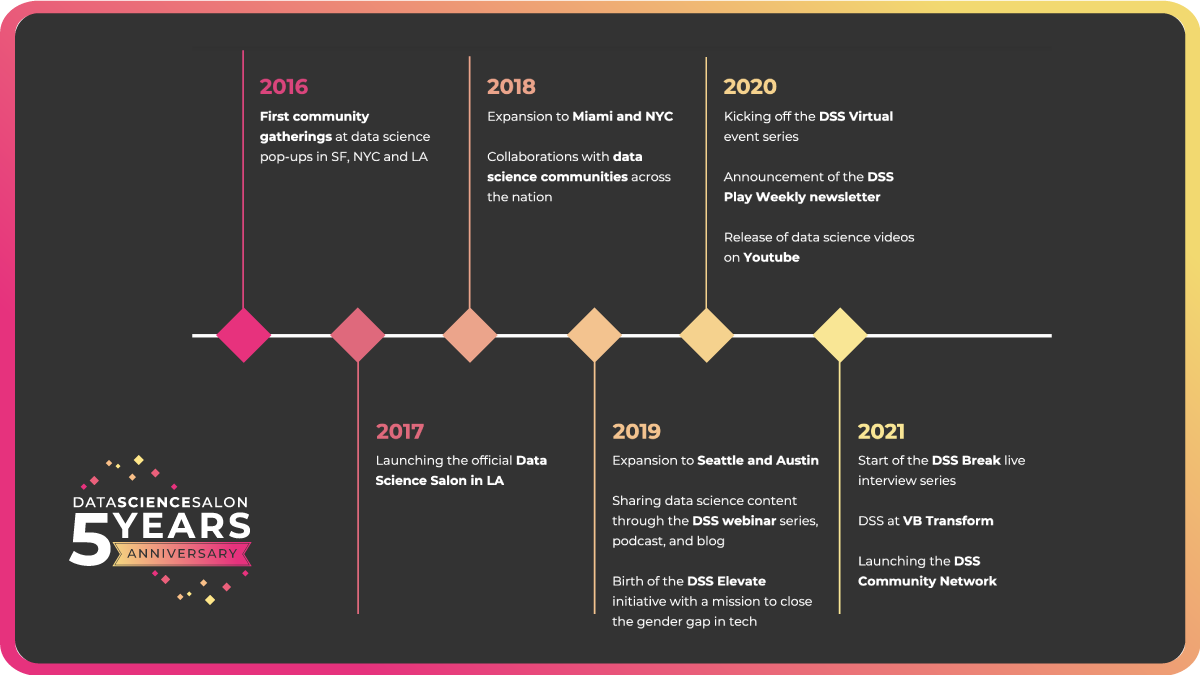 The virtual experience allowed us to partner with other data science and AI communities in the US and now globally. We’re expanding our network and collaborating with communities such as General Assembly, Women Leading AI, NYC Media Lab, KD Nuggets, Women in Analytics, WiMLDS, IBM Community, O’Reilly Media and many more.

These partnerships resulted in amazing new initiatives, such as the collaboration with VentureBeat on their VBTransform event, where we hosted a separate DSS Virtual event focused on AI and machine learning applications in the enterprise.

We’re also collaborating with leading data scientists in different industries for the newly released DSS Break editions, where they share their data insights in a 15 minute LinkedIn live interview with Anna. Here’s an overview of the previous editions you can still watch.

A big announcement this year was the launch of the new DSS Community Network just last month! This is a virtual home for data scientists to ask questions, share resources, look for talent and check out upcoming events. It also includes the DSS video repository, which gives paying members access to all talks hosted at the previous DSS events. It’s a pretty amazing library, if you haven’t already, make sure to join the community here and check it out.

So, now that we’ve built probably the most amazing data science community and created more than a hundred in-person and virtual experiences over the past five years, what’s next? The answer is: HYBRID.

We’ll kick off the next event year with the first DSS Hybrid in our hometown Miami on February 16th. This event will also be streamed virtually so the content will be accessible to all of you. Those joining in person will get to enjoy great entertainment and networking sessions, so there’s definitely a good reason to be there in person if you can make it.

Another hybrid event is coming up in Austin in March, and more are to be announced for NYC and LA, so make sure to sign up to the DSS newsletter below and join us on LinkedIn to receive real-time updates.

We’re also super excited about collaborating with Women in Analytics for their conference in June in Columbus, Ohio, where we’ll be hosting a DSS Elevate fireside chat. More about that to come soon!

And, of course, we’ll continue to create and share valuable content for the community, including a new content format, which is still in beta and which we’ll be sharing with you soon.

Many great things are yet to come and there’s no better moment than now to give a HUGE THANKS to all of you for sticking with us and accompanying us along this journey. We’re very thankful for each community member, sponsor, partner, advisor, collaborator, DSS team member, and everybody who contributes to our amazing DSS community. Cheers to us and many more years to come! 🥂